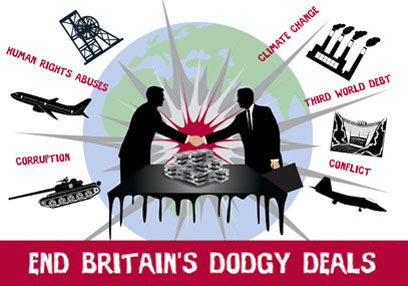 Get involved with Jubilee Scotland’s campaign and help to put the spotlight on the UK Government’s Export Credits Guarantee Department (ECGD). This obscure and little-known department holds over 90% of debt owed to the UK and it uses taxpayers’ money to underwrite unethical deals which lead to climate change, human rights abuses, and fuel conflict and corruption in the developing world. For actions, briefings and news click the button to the left or click here.

Rather than tightening ECGD rules and promoting responsible finance, the UK Government used the recession to further deregulate the department, most notably making a ban on child or forced labour in ECGD projects only ‘optional’ in some cases. For this reason, we’re calling it the ‘Department for Dodgy Deals’ and we need our supporters to put pressure on the Government to end this unscrupulous use of public money.

We are calling on supporters to write to Vince Cable, Secretary of State for Business, Innovation and Skills, and ask him to put an end to Britain’s dodgy deals. Our campaign postcard is available now; to order yours please go to our resources page here.

You can also go to Jubilee Debt Campaign’s website to do a direct e-action here.