You are here: Home / Campaigns / Rethinking Private Financing in Scotland / ‘The SNP abolished PFI, or did they?’

This article was written by Dr Scott Arthur.

In 2006 Alex Salmond told Scotland that “PFI was a quick fix and a costly mistake”. If elected (he was), he was going to ensure  “our public assets can be held in trust for the nation all without the unnecessary private profit that is part and parcel of PFI”. Forget the fact that “unnecessary private profit” was never defined, this was about bashing Labour.

In their 2007 manifesto, the SNP said:  “The Private Finance Initiative was devised by the Tories and has been embraced with enthusiasm by New Labour. However it is really a type of privatisation, with all the disadvantages which that entails.”

Of course, the same manifesto was less clear on what the SNP alternative was.  The public perception soon became that PFI was abolished.  An easy mistake to make: 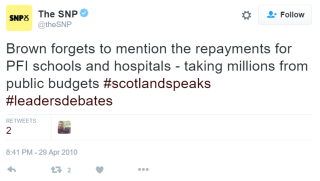 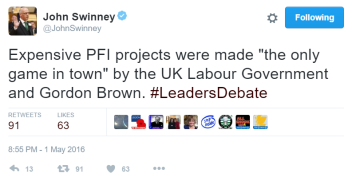 In reality, it had been replaced by the SNP’s “NPD” (non-profit distributing) model. Progress was slow, but by 2011 peer reviewed research stated it came at “high economic cost”. The same paper concluded: “The argument of the Cabinet Secretary that NPD will eliminate ‘excessive profits’ is not supported by the evidence.”

In July this year the alarm bells began to ring quite loudly. The Guardian reported that the programme will cost the taxpayer £10 billion in borrowing and running costs between now and 2048.

The same document quoted a leaked SNP Government memo concerning the projects: “Any perception of public sector control over the [project] delivery company must be avoided.”  The problem was that misinterpreting EU rules was expected to cost millions in lost expenditure as it had to match the private spending under the NPD programme with money borrowed from the Treasury – equivalent of £932m.

Now details of the Dumfries Hospital have come to light. This project cost £212m to build, but the interest on the loan tops £160m: “According to documents released by NHS Dumfries & Galloway under FoI legislation, the consortium – whose members include insurance group Aviva and building firm Laing O’Rourke – is charging an interest rate of 5.1% on borrowings of £218m. This results in the consortium earning more than £100m in interest payments from the public sector. It is also charging 11.3% on a further £24.2m in ‘subordinate debt’, which will earn financiers £37.5m in interest. If Scottish ministers had instead used public borrowing they would expect interest rates from the state-run national loans fund of about 1.6%.”

Little wonder that Audit Scotland have launched an inquiry into the SNP’s re-branded PFI.

If you would like to write a piece for our website then please get in touch via mail@jubileescotland.org.uk