You are here: Home / Campaigns / Jubilee Scotland and the Independence Referendum

We now know the result of the two-year national discussion about Scotland’s future. And whether you were disappointed or relieved at the outcome, I’m sure we can agree that it was a brilliant victory for democracy. With a turn out of over 80% and debates about the referendum taking place on buses, in cafes and on the streets (as well as the ‘official’ debates like our 2014 matters series!), it was clear that this was a discussion which gripped the nation.

It was a discussion not just about whether Scotland should be independent, but about what kind of country we wanted to be, how we should treat the most vulnerable in society, and where we see ourselves in the world. These discussions are continuing now, with crucial issues like economic justice, climate change and inequality high on the agenda. We will continue working with both the UK and Scottish Governments to ensure that debt justice will be a priority regardless of the result of the referendum, as well as helping people around Scotland discuss the referendum in a neutral setting.

Below you can read our briefing on debt justice and the referendum and find out more about our work on the 2014 matters series.

Debt Justice and the Referendum 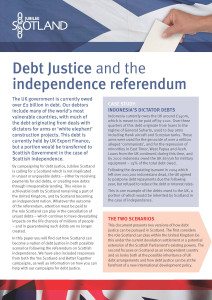 Find out about our work in the 2014 Matters programme – talking about the important issues.