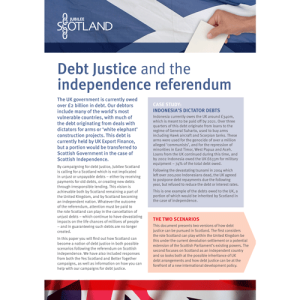 In just a few months, the people of Scotland decide on their constitutional future. The debate presents an exciting opportunity for charities and campaigning organisations to reassert the importance of the issues they campaign on and put these at the forefront of parties’ concerns as the parties, politicians, and referendum campaigns themselves look to present their visions of a post-referendum Scotland. Jubilee Scotland has been thinking a lot about what the implications for international debt will be in either outcome and how its campaigns can move forward post-2014 be it in an independent Scotland or one which remains part of the United Kingdom.

Debt Justice, regardless of result

The principal aims of Jubilee Scotland remain the same. This year, we launched our Debt Justice Pledge which presents four key ways in which Scotland can become a nation of debt justice, a Scotland which:
•    holds no unjust or unpayable debts;
•    is not implicated in the creation of new unjust or unpayable debts;
•    offers itself as a seat of arbitration for unjust and unpayable global debt;
•    and promotes debt justice internationally.

It is Jubilee Scotland’s belief that this vision is achievable both by Scotland remaining part of the UK but equally by Scotland becoming an independent nation. It is not our intention to take a side in the referendum debate, rather to put forward the steps through which Scotland could pursue these goals in either scenario. It is important though to start thinking about these issues now. Our briefing ‘Jubilee Scotland and the Independence Referendum’ which can be downloaded below sets out details of the two models.

How will the referendum affect debt justice?

Currently sovereign debt is held by the UK Government but should Scotland become independent it looks set to inherit a people’s share of this, approximately 8 percent. We are making a case to the Scottish Government that if and when this happens, a full audit of the debt must be conducted to establish if and where these debts are unjust and illegitimate. This would include uncovering instances of irresponsible lending where loans have, for example, been made to dictatorial regimes, related to weaponry or environmentally unsound projects, been lacking in transparency, and made to countries in which repayments are standing in the way of development and poverty eradication. It is important that if Scotland does inherit any debts arrangements it cancels all those deemed to be unjust if it is to set a just and responsible precedent for its future policies on international debt. If Scotland remains part of the UK, however, Jubilee Scotland will continue campaigning for a debt audit of all debts owed to the UK and the subsequent cancellation of any bad debt, asking a devolved Scottish Government to support us in this and to put pressure on Westminster to enact this process.

The vast majority of the debts owed to the UK originate from deals involving UK Export Finance (formerly the Export Credit Guarantee Department). If Scotland becomes independent it will need to create its own export credit agency to support Scottish companies and exporters entering markets overseas. Importantly this must not simply follow the example of UKEF but be designed in a way which brings an end to the creation of new unjust and unpayable debts, for example through assessments of human rights and environmental impacts before any loan is made and greater transparency in management and procedures. Should Scotland stay part of the UK its exporters will remain dependent on UKEF unless further devolution of powers is negotiated in such a way as to permit the setting up of a Scottish export credit agency. Jubilee Scotland is therefore calling on the Scottish Government to pursue this policy irrespective of the referendum result. In a case of status quo with UKEF remaining the agency which is supporting Scottish companies, we will continue to work with our partners at Jubilee Debt Campaign to put pressure on Westminster to reform the agency’s practices.
Following these principles and the further policy goals outlined in the briefing, Jubilee Scotland believes Scotland has a very real opportunity to become a nation of debt justice. We have also been in contact with both Yes Scotland and Better Together who have provided detailed responses to our proposals setting out their views on how debt justice can be achieved.

“Yes Scotland welcomes the publication of ‘Jubilee Scotland and the independence referendum’. By engaging in the debate now and developing policy ideas now, charities such as Jubilee Scotland can begin to shape how an independent Scotland would look after a Yes vote. We believe that Jubilee Scotland and its supporters can be very optimistic that in an independent Scotland, many of its goals will be realised.So why settle for lobbying Westminster for change when we ourselves have the opportunity to make the change directly? Instead of lobbying and waiting, a Yes vote empowers us to act and to lead on debt justice.”

“The UK has an excellent record on debt justice: leading world in cancelling billions of pounds of debt in of some of the world’s poorest countries. As part of the UK our efforts to tackle debt are bolstered by the scale and influence of the United Kingdom. We can look to the future with optimism and be confident that by working together as part of a powerful and influential United Kingdom, we can achieve debt justice far better than we ever could apart. We owe it to all those who continue to be afflicted by poverty to do so.”

You can read our full briefing and the responses from both campaigns here: