You are here: Home / Articles and Blogs / Does Syriza mark the start of Debt Justice for Europe? 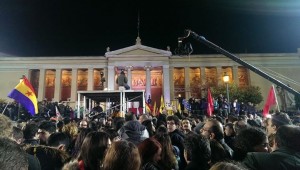 Whether or not you would have voted for them, there is no denying that Syriza’s success in the Greek elections has pushed debt very firmly back on the agenda! Left-wing Coalition Syriza gained 149 seats in the Greek election, just short of an absolute majority. They ran on an anti-austerity platform, with a particular focus on rejecting the bailout options offered by the Troika and instead holding a debt conference with creditors.

Since 2010, the IMF, European governments and the European Central Bank have lent €252 billion to Greece. Over the same period, €232.9 billion has been spent on debt payments, bailing out Greek banks and paying ‘sweeteners’ to speculators to get them to accept the 2012 debt restructuring. This means less than 10% of the money has gone towards the Greek people.

In 2010, virtually all Greek government debt was owed to private entities such as banks. Today 78% is owed to the public sector, primarily people in other Eurozone countries, but also throughout the world through the IMF’s loans.

Syriza’s victory means that debt will remain on the agenda for some time, and could see popular uprisings against debt in other periphery countries.

If you’re interested in finding out more about the murky world of Eurozone debt you can look at the great new briefing launched by Corporate Watch today, and read 6 surprising facts about the Greek debt crisis by Jubilee Debt Campaign. If you’re a member of the Church of Scotland, why not check out our resources to help you explore Eurozone debt through worship?