You are here: Home / Events / Screening of ‘The Price of Memory’ at Glasgow City Chambers

Screening of ‘The Price of Memory’ at Glasgow City Chambers 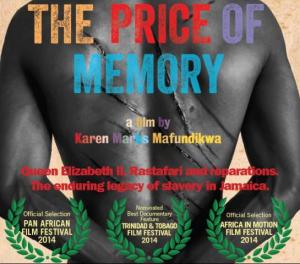 You are invited to join us for a very special screening of ‘The Price of Memory’, a feature-length documentary film about reparations and the legacy of slavery in Jamaica, including the Rastafarian quest for repatriation.

After the film there will be the opportunity to hear briefly from Dr Mariama Williams, former head of the Jamaican Debt Network about the struggle for an end to global debt slavery.

The Price of Memory is poised to become a game changer in the field of socio-political development…On its own it is a well-crafted and much-needed history lesson, but combined with the ongoing efforts of reparation enthusiasts, the film may finally provide the momentum they have been seeking. http://www.susumba.com/

Have an event, meeting or demo coming up? Submit it here and it will appear on our events calender!