You are here: Home / Articles and Blogs / Guatemala: a study in human rights abuses

On International Human Rights day, Jubilee Scotland examines the role of debt and international financial institutions on the people of Guatemala, and questions the role Scotland could play in global development. 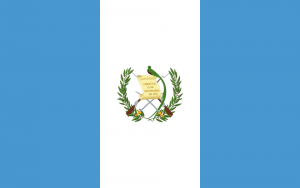 For much of the post-war period, Guatemala’s past has been a story of dictatorships, terror, and genocidal regimes. It is estimated that 200,000 people have died as a result of murder, torture, and extreme poverty whilst the country continues to be affected by a legacy of successive odious governments. It remains one of the most impoverished countries in Latin America and ranks at just 131 on the United Nations Human Development Index, out of a total of 187 countries. In the Americas, only Haiti ranks lower.[1]

A recent report by Jubilee Debt Campaign has been launched to investigate the build up of sovereign debt in Guatemala and the role this has played, and continues to play, in reproducing poverty across the country, particularly in its rural areas. It looks at how debt has been accumulated, the impact on the country’s economy, society, and population, as well as the steps needed to ensure the people of Guatemala are not left paying for the illegitimate actions and unfair treatment endured at the hands of their former leaders.

Guatemala has a long history of debt and exploitation by foreign powers. In the late 1970s and early 1980s, when the wave of terror was at its highest level, foreign lending to the country increased substantially. Successive loans of between $100 million and $300 million every year were granted from 1978 to 1982 and by 1985 Guatemala’s debt had reached $2.2 billion, an increase of over $2 billion in just 10 years. The majority of this debt was owed to multilateral institutions, in particular the World Bank, and today the country is still paying these institutions back over $400 million every year. This undoubtedly has important implications for Guatemala’s ability to rebuild and develop its economy alongside providing essential services to its citizens. Money which could otherwise be spent on moving people out of poverty and developing essential infrastructure is being shipped out of the country and into the pockets of Western lenders.

Significantly however, the loans granted to Guatemala were crucial in supporting the decades of terror its population endured, funding ill-conceived, unsustainable projects which impoverished families and led to displacement and destruction of rural communities. The Chixoy Dam is just one example but one which highlights some of the worst effects of the World Bank’s irresponsible lending. [2]In the late 1970s and early 1980s the Chixoy Dam project, $400 million of its budget financed by the World Bank and Inter-American Development Bank, acted only to exacerbate levels of violence and persecution against Guatemala’s indigenous people. In seeking to create a new reservoir as part of the project, the population of the Rio Negro region were threatened with eviction. When the local population resisted this pressure to move, their opposition was then exploited by the government as justification for counter-insurgency and increased violence against the Rio Negro community. It is estimated the project forcibly displaced more than 3,500 Mayan community members and led to 6,000 families suffering loss of land and livelihoods, with more than 400 people were massacred because of their opposition to the project. For the survivors the impact continues to be felt. A Probe International Report from 2001 states: “members of the Rio Negro community live in extreme poverty in comparison to neighbouring communities. However, before dam construction, the community enjoyed, relatively speaking, a high standard of living.”[3] Furthermore, World Bank loans for this project (and a second Chixoy Dam project in 1986) have cost Guatemalan governments $100 million in interest. The Chixoy Dam is a single example within a large back catalogue of odious debts originating from multilateral lending to Guatemala’s past dictatorial regimes. Worryingly the World Bank appears content to continue lending money to the country for new projects which threaten to exploit and impoverish even more communities. 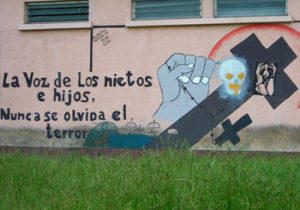 A mural in Pacux, home of the Rio Negro survivors. http://upsidedownworld.org/main/guatemala-archives-33/1442-guatemala-the-forgotten-spirits-of-rabinal

As Barbara Rose Johnston at the Center for Political Ecology states, “the World Bank and Inter-American Development Bank… loans were the primary source of foreign aid to a nation ruled by a military dictatorship engaged in systematic state-sponsored destruction of Mayan peoples”[4]. Debt accrued in the period was loaned to illegitimate and unaccountable governments of which the lenders were well aware whilst only minimal, if any, token investigations into possible impacts of projects were conducted. It is unjust for new governments to be saddled with these debts and responsibility must be shared by the countries and multilateral organisations which funded and supported projects at the expense of the Guatemalan people.

The experience of Guatemala and this new report show that something needs to change. Not only should these illegitimate and destructive debts be cancelled, the accumulation of new odious debt has to be prevented. Lobbying for an audit of the debt in Guatemala and campaigning to force the World Bank to overhaul its current policy and apply ethical principles of justice, fairness, and sustainability to its future lending will be vital in this process.

Importantly though, we should also be looking closer to home. In the UK, UK Export Finance (previously the Export Credit Guarantee Department), a semi-autonomous government body existing to support UK exporters to enter in to international markets considered risky and where the likelihood of failure is high, has been responsible for numerous dodgy deals similar to that seen in Guatemala. Deals where UKEF is involved are typically made in the arms trade, aerospace or fossil fuel related industry (over 75 percent of UKEF’s observable transactions) and are often based in countries with unstable governments, despotic regimes, and areas of conflict, which further compounds their negative effects. Egypt, for example, owes the UK approximately £100mn which includes loans for arms made to the regimes of both Mubarak and his predecessor Sadat. Between 1985 and 1986 UKEF supported £250mn of arms sale loans to finance a tank factory near Cairo and a military city west of Alexandria.[5] As in Guatemala, the Egyptian people are now left paying for the actions of the governments which previously oppressed them.

Scotland has an opportunity to take a stand against unethical lending. It seems possible that, whatever the result of the referendum, Scotland will be given the powers to create export credits. We must campaign here to ensure that this agency will not follow the route of corrupt deals, human rights abuses and disregard for environmental considerations that has characterised UKEF, but instead lead the way in being a positive and socially responsible export agency, setting an example internationally of how exporters can be supported in a way that is ethical and fair[6].

[4] Johnston,  BR, 2011: An Open Letter to Your Excellency, Alvaro Colom Caballeros, President of the Republic of Guatemala (reproduced on Counterpunch on 22 March 2011 as part of her work with International Rivers)