You are here: Home / Articles and Blogs / Illegitimate Greek Debt

I don’t know what you were up to this Tuesday 11 June 2013 but I was demonstrating in front of the Edinburgh International Conference Centre. Well, almost. Because despite long negotiations with the police, we never made it through to the entrance of the building where the TEDGlobal Conference was taking place. No, we were not trying to get there without paying the £6000 admittance fee. We were rather chanting our opposition to George Papandreou giving a speech in the first session of the conference. 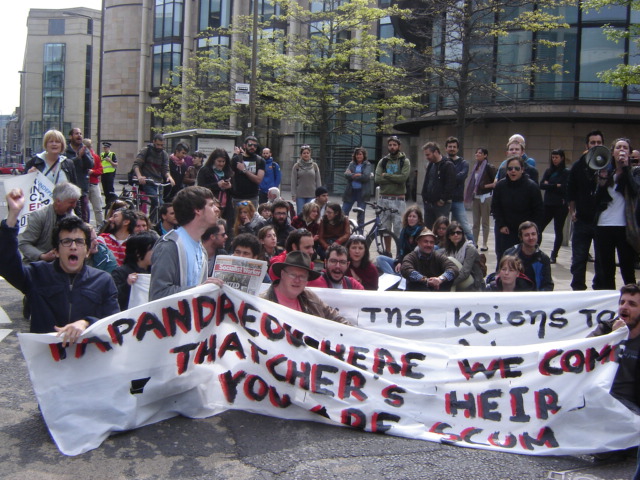 “Papandreou, who’s that?”, you ask. Well, you know, the former Prime Minister of Greece, elected in 2009 who served a two-year premiership during which time he was supposed to put an end to austerity measures. “Oh, so that’s why he was invited. To tell attendees how he managed that.”, you naively assume. Well, not exactly. By the way, I thought you were aware of the dreadful current situation in Greece! Mr. Papandreou “drew lessons from the Greek crisis”. I assume the many Greeks who took part to the protest were perfectly able to do that. “We know the lessons from the crisis firsthand. We don’t need lectures from the bosses”, their banner read [1].

Let us imagine anyway how George Papandreou’s speech sounded like.

“Ladies and Gentlemen, thank you for being here today. I understand you are expecting me to draw lessons from the Greek crisis. When I came into office in 2009, I inherited a fair amount of debt, to say the least. After meetings with my European colleagues and elected – but mostly non-elected – officials, I got convinced that the best way to tackle the Greek debt and deficit was to get the country into deep recession. The best way to achieve such a result was of course to implement austerity measures, designed in agreement with the Troika, that is the European Central Bank (ECB), the International Fund (IMF) and the people of Greece. I’m kidding, I meant the European Commission (EC).

Of course it did not matter whether or not the same people who had voted me in agreed with these measures. They were quite opposed to it by the way. As soon as we started reducing the minimum wage and pensions, cutting public spending, privatising and making civil servants redundant, they responded by organising massive protests and general strikes. I had a ready-to-use solution though. It was not the first time such policies were imposed against the will of the people. I could count on the IMF’s decades-old experience with Third World countries and on my own country’s history for that matter [2]. Now, if you find yourself faced with opposition, do not slow down the process and keep going. Ideally you would even buy state of the art military equipment and show no mercy for the protesters. Do not forget to criminalise workers’ ability to defend their rights. Naomi Klein calls this efficient combination the “shock doctrine”. In the end, your opponents should gro 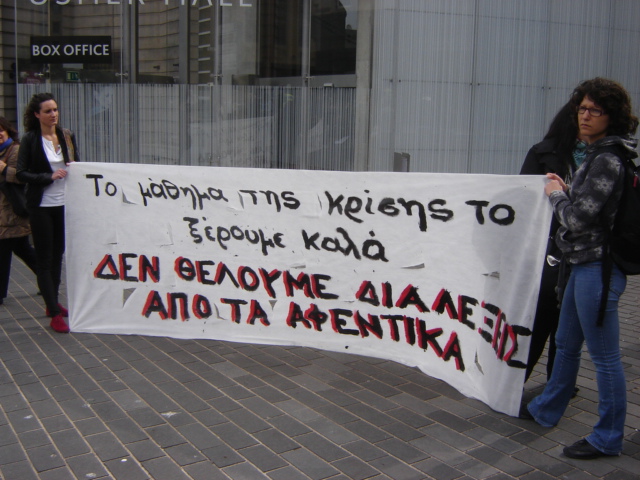 w tired and look powerlessly at the social fabric of the country being ripped apart [3].

How can you assess my success? Not only Greece fell into a deep recession, it is now also facing a humanitarian crisis. Thanks to widespread poverty, people can no longer afford medication, to heat their home, to go to the hospital or to send their children to school. 21% of people now live in poverty and 62% of young people are unemployed. But it is the price they pay for the collapse of the international financial system, bank bail-outs, speculation, the euro and the failure of the successive Greek governments to implement a fair and effective tax system. As you know, “we’re all in this together”. In addition, we cannot be expected to cut on military expenditures, this money goes into the pockets of French and German military industries. So, in addition to reduction in wages for those lucky enough to have a job, we decided to sell out water, energy and railways and to increases taxes, for everyone. Isn’t it a brilliant idea? We ask the average population to pay more with less money. Hence the rise in the number of people committing suicide and the rise of the far right .

I am happy to announce that Golden Dawn had Members of Parliament elected in the last elections. With massive support for the party within the police, racially motivated violence can go on with impunity. You can also add to my record that life expectancy is due to fall and the Greek debt to go up this year. Let’s be honest, the point of all that was not really to reduce it anyway. [4]“

Fair enough Mr. Papandreou. Now, I know most countries in Europe are tempted to follow suit. However, in a democracy, you should take people’s opinion into account before you go ahead with measures which seriously undermine human rights. If the only way you found to pay back the debt is to cut on healthcare and education and to increase poverty, then it certainly means it 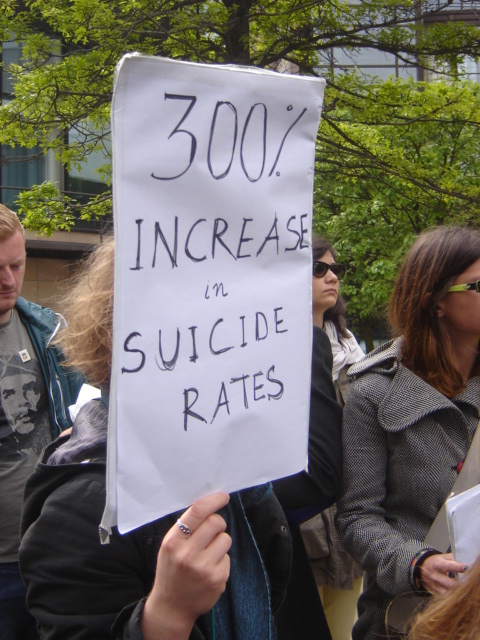 is unpayable. As such, it should not be repaid. All the more that if a debt audit is to publicly uncover where the debt came from, who benefited from it and whether and how it should be repaid. Should the Greek people pay for the 108 billion euro required to bail out the banks for instance? Finally, if force has to be employed to push the austerity measures through, this is another indication that the debt is illegitimate. Illegitimate debt actually builds on the concept of odious debt, presented for the first time in 1927 by an economist called Alexander Sack. Odious debt is also based on three prerequisites. First the loan has to be received by a government without the approval and knowledge of the people. Secondly the loan is not spent on activities beneficial to the people and finally the lenders know of this situation. Ironically, this concept has been used several times by the United States to repudiate debt, most recently in Iraq. That the members of the Paris Club asked for the concept not to be officially mentioned was not a reason not to appeal to the concept. Instead Mr. Papandreou, you gave up the sovereignty of Greece and defaulted on the Greek people.

You did not get out of the building Mr. Papandreou in spite of us chanting “Papandreou get out! We know what you’re all about: cuts, job losses, money for the bosses!”.

You cannot deny you – and your successors – implemented the cuts and the job losses. As to the “money for the bosses”, two examples will speak for themselves: the national lottery was privatised despite the fact that it was highly profitable and one gold mine in the north of the country was sold for £9.5 million whereas it is believed to have gold and copper worth £8 billion. Other leaders showed more boldness than this though.

Some governments have refused to pay the debt. Countries such as Ecuador, Argentina or more recently Iceland defaulted, audited their debts or insisted their own terms for repayments. In Argentina, it took the President having to flee in helicopter under popular pressure. Not surprisingly, these countries all fare better than Greece, Spain or Portugal. Ecuador even went further and passed a constitution which prohibits the socialisation of private debts. Beforehand, an audit reviewing all debt contracts from 1956 to 2006, had proven the debt was odious, illegitimate and unconstitutional. During the 1980s and 1990s, Ecuador had spent 50% of its budget on debt repayments and 4% on healthcare. Rafael Correa, elected in 2006, decided debt repayments would no longer prevail on life. Thus, Ecuador declared the cessation of payment for 70% of Ecuador’s debt in bonds. But I guess you were not really willing to go against the neo-liberal agenda. People are though. They are prepared to take to the street. They already have in Scotland to call for the bedroom tax to be axed and it is no surprise people here were keen to hold you accountable Mr. Papandreou. It is not worth putting the blame on Brussels and financial markets [5], you also share some responsibility. 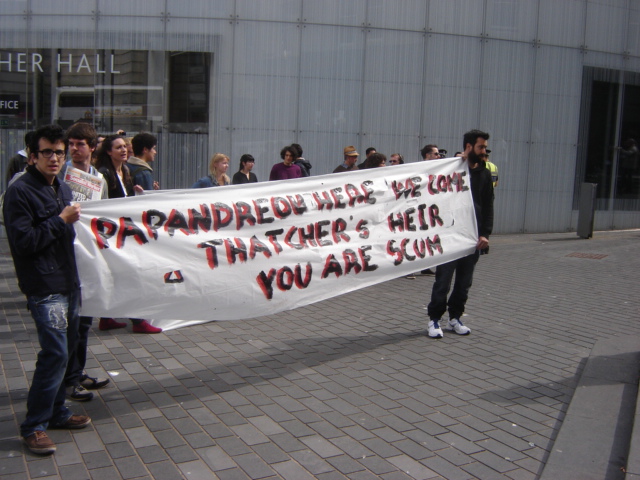