You are here: Home / Articles and Blogs / Ivan the Terrible: Kirani James and the struggles of Grenada 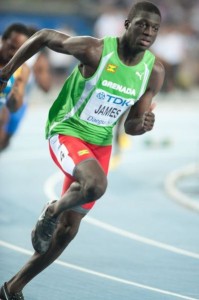 Kirani James, newly crowned Commonwealth and Olympic 400 metre Champion, was born on the tiny Caribbean island of Grenada. His astounding successes have been a great source of pride for a population still reeling from the devastating effects of Hurricane Ivan.

As a small island with a population of just 110,000, Grenada relies on a few key sectors, notably the export of nutmeg and the tourism industry, to fuel its economy. However, when Grenada was struck by Hurricane Ivan in September 2004, these two sectors suffered horribly with 95% of the buildings on the island damaged and the vast majority of nutmeg trees toppled. Indeed, estimates now suggest total damage exceeded 2.5 times Grenada’s annual GDP.

Kirani James was only 12 years old when the hurricane struck, and yet whilst the island grieved, some have seen it as a blessing in disguise for his athletics career. The only synthetic 400m track on the island was destroyed by the hurricane meaning all promising track-stars were left with little choice but to train on grass. Many in Grenadian running circles believe this has made James a far stronger and more robust runner then he would otherwise have been.

Whilst James’ running continued going from strength to strength during his teenage years, Grenada and its economy struggled to re-build after Ivan. With its tourism sector further hit by the global financial crisis, the government was forced to take out substantial loans to prop up national services. The results have been nothing short of disastrous as these IMF loans are said to have actually further destabilised and stagnated the national economy. After almost a decade without any real economic growth, Grenada’s previously sustainable debts have spiraled out of control.

Kirani James’ gold in London 2012 brought the entire country to a standstill as they celebrated the nation’s first ever Olympic medal in style. Nonetheless, the national jubilation was short-lived and just a few months later, in March 2013, Grenada defaulted on its debt to private and most bilateral creditors (including the UK).

After various negotiations to recommence payments, the country now has debts totaling $679 million; staggering for such a small state. It means Grenada has the second largest amount of debt per person in the entire Commonwealth. Everyone is affected as health and education spending have been slashed, and unemployment levels have risen to over 30%.

Grenada exemplifies everything that is wrong with disaster loans. In the early 2000s Grenada had one of the highest growth rates in the Caribbean before it suffered from Hurricane Ivan. A disaster will always upset an economy’s delicate balance but to counter this with loans instead of grants seems to only make the situation worse; the balance is further disrupted.

Only time will tell if Grenada can reclaim its place as a thriving Caribbean state. Until then, for a tiny island battling hurricanes and the exploitative lending practices of the rich, Kirani James provides a very welcome respite.

To call on the UK Government to give more aid as grants, not loans, contact us to order campaign postcards!