You are here: Home / Articles and Blogs / Local-National Partnerships : A new model for Scotland

Lessons from a failed system 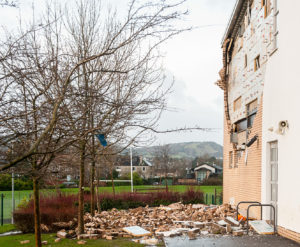 Oxgangs School wall collapsed in 2016, due to poor management by PPPs

Our schools are collapsing, hospitals are being failed and yet there’s more money being spent on them than ever, with nobody around to be held accountable. That’s the situation that our country has found itself in after years of contracts forged by Public Private Partnerships. Our infrastructure is costing taxpayers billions more than it’s worth, because of contracts that has private companies draining public funds year after year.

Scotland has been entering PPPs since the early nineties, as a way to bring investment to the country’s infrastructure. The country’s limited ability to source funds for new projects meant that PPPs were a lifeline in getting projects off the ground, but decades on they have dramatically exceeded the costs of most projects financed by government funding. High interest rates, declining service standards, and lengthy contracts have put local authorities in more debt than ever before, having a knock-on affect on our public services. Projects considered failures can still benefit private companies greatly, with tax haven investors making millions off the currently empty, unfinished new Sick Kids Hospital in Edinburgh.The current interest on Scotland’s 84 Private Financing Initiative (PFI) contracts is currently projected to cost the government and taxpayers £11.5 billion, double the capital value of the of what they’re actually worth, paid over long contracts of up to 30 years. At Jubilee Scotland, we are proposing a new way of public financing that values the public over profit.

A Local-National Partnership is a model where Local Authorities are supported by a national body. It could take the form of a Scottish National Investment Company (SNIC) that finds the best possible solution for managing and financing infrastructure projects. It will offer guidance to local councils in legal, energy and construction issues, looking over financing packages that fit them and avoiding the traps of short term thinking and expensive problems that come from these extended contracts. In this model, local authorities and their operators will be the legal owners of their projects instead of private companies, with public interest and transparency maintained at the core of each one.

The Scottish Government is restricted by strict borrowing rules but local councils are not. A number of options are open to funding public work, such as borrowing from the Public Works Loan Board (PWLB) and the Scottish Investment National Bank (SNIB) that is set to open in 2020. There is little new risk associated with sub-national borrowing, PPPs at the moment have our councils paying large amounts in rent for public work, with complex contracts that are impossible to default on. The risk of local authorities facing bankruptcy in a Local-National Partnership is lower than in a PPP because the payments made are significantly lower. By reducing the risks of sub-national borrowing, our government can aid local councils borrow funds as a guarantor, providing oversight and assistance which allows them to work on their own projects.

When it comes to public works being built with private financing, the system has failed. We need to ensure that in future we don’t make the same mistakes in handing over our public money to people hiding it in tax havens, with no accountability for their mistakes. By taking on an approach that serves the needs of local communities, we will be able to make their projects work for them instead of being indebted to faceless organisations that only care about profit.