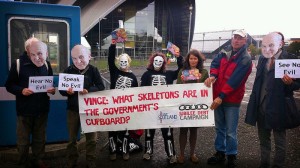 Members of Jubilee Scotland and the World Development Movement gathered outside the Liberal Democrat conference on Glasgow on Tuesday dressed as skeletons to call on Vince Cable to implement the party’s policy to audit debts owed by developing countries to the UK, and cancel those which are from unjust loans to dictators. The spooky protestors will be asking what skeletons are lurking in the government’s cupboard as a result of deals with repressive regimes.

“conduct our own audit of all existing UK government and commercial debts, ruling invalid any past lending that was recklessly given to dictators known not to be committed to spend the loans on development.”[1]

but they are now refusing to take action on this promise. Protesters will be demanding an audit of all the debts owed to the UK, and will be appealing to delegates at the conference to put pressure on Vince Cable to keep to his word.

“In opposition, Vince Cable was outspoken about the need to audit and reform UK Export Finance, accepting that many of the debts owed to the UK are unjust and should be cancelled. Now though, he refuses to conduct an audit, and supports the UK Government in promoting arms exports to repressive regimes. We are calling on the Liberal Democrats to stick to their own policies, and conduct and audit into the dictator debts owed to the UK. Many delegates at the conference today were unaware that Vince Cable was refusing to carry out the policies of his own party.”

Loans on which debts are still owed include:

In 2012, an all-party inquiry in the Westminster parliament into UK Export Finance recommended that an audit should be held into the UK’s debts. 198 British MPs have signed a motion supporting an audit, including nearly all Liberal Democrat backbench MPs.

Take action to ask the lib dems to keep their promise here.