You are here: Home / arms trade 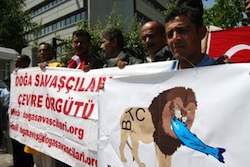 The Clean Up Britain’s Exports (CUBE) coalition has brought out its second (summer) update for MPs, to keep representatives informed and championing the issue in the House of Commons.

The issue covers the scandal of UK arms exports to Argentina before the Falklands War, and the export of five Hawk Aircraft to the Mugabe administration between 1989 and 1992.

James Picardo, Campaign Director at Jubilee Scotland, spoke as part of the ‘Global Challenges’ series of events hosted by Edinburgh University. Here is what he said: Economics on the one hand, and justice and human rights issues on the other hand, are often discussed as separate phenomena; as ways of looking at the world that […]

Kusfiardi’s last engagement was on Thursday the 5th of June, when we went with our colleague Sarah Williams from Jubilee Debt Campaign to meet officials from the Export Credit Guarantee Department, the UK government department who ensured – and are currently collecting repayments for – the bad loans that are the focus of our campaign. […]

Jubilee Scotland is currently trying to convince the UK government to cancel the >£500 million it’s owed by Indonesia. This is a small goal within a much broader international objective, which is to promote the doctrine of ‘odious debt’. ‘Odious debt’ is a concept which enjoys some international credibility, but not nearly enough! Put simply, […]