You are here: Home / News / The economic history of PFI – as a guide on how to end it

At our report launch last month, one of our key speakers was Helen Mercer, whose expertise on Private Finance Initiative schemes made a huge contribution to our research. She talked to us about how we got into this mess and why this is a systemic problem caused by our governments, that can only be solved by changing how we the approach oversight of these poorly executed schemes.

There is a strong tendency among campaigners on PFI to see the problems with which we are all familiar – the high cost of finance, poor construction, excessive profits – as stemming from factors such as woolly thinking, incompetence, corruption, fraud, lack of transparency and weak monitoring. I argue first that while such factors may exist they are not the root causes: the problems with PPPs are systemic and structural in an environment deliberately created by governments.

A simple and curtailed history of PFI

Pent up demand for investment in public infrastructure

PFI BECAME THE ‘ONLY GAME IN TOWN’

PROFITABLE INVESTMENT WAS UNDERWRITTEN BY GOVERNMENT

PFI schemes also became a key driver of the outsourcing of public services, as privately provided servicing and maintenance of the PFI building became part of the PFI contract. (This has not been the case for the variants PF2 and NPD/Hub projects but has re-appeared in the Mutual Investment Model (MIM’s) The PFI mix was a toxic one of heavy debt, outsourced servicing, together with a lack of control over the contractors themselves.

This mix of factors shows that the failings of PFI cannot be characterised as unintended or unfortunate. The solutions therefore cannot lie just in FOI requests, or judicial review or tax adjustments. These activities provide publicity and additional knowledge and are therefore useful in campaigning, but such actions cannot be paraded as solutions.

Hence the economic history of PFI shows a systemic, in-built purposeful failure in which even personal or corporate corruption, assuming it can be proven, is of minor importance in understanding the root of the problems. This picture of the system, the environment within which PFIs have developed needs to be complemented by considering the way PFI contracts are structured.

The structure of PFI contracts

To describe the structures set up through PFI and similar projects is again to broach a large and complex area so I want to focus on just one key point element – the role of the company which signs the contract with the public authority – the Special Purpose Vehicle or SPV.

It is the SPV which, in return for an annual payment, secures all sources of finance, pays building contractors and, where relevant, the service providers. They are private companies, whose shares are owned by private investors increasingly infrastructure investment funds, such as HICL, Dalmore Capital, Standard Aberdeen, 3i, Innisfree, Semperian.

The diagram shows an SPV sitting like a spider at the centre of a web of contracts – the primary contract with the public authority and then the various contracts with lenders and with the contractors. 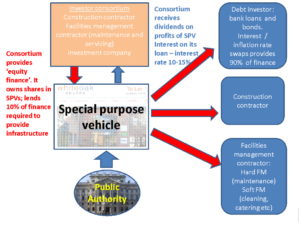 The role of the SPV is effectively to pump public money to various private actors and most importantly to the shareholders themselves. The shareholders extend 10% of the finance needed for the project and their loan carries interest rates usually of around 10-15% and is one of the reasons why PFI is so expensive. In addition as shareholders they are entitled to dividends and these accrue from any difference between what the public body pays the SPV (in debt, payment for services etc) and the monies owed by the SPV to lenders, builders and service providers. In the case of the Scottish Non-Profit PFIs any such surplus does not accrue to investors.

The position of the SPV is the main reason why buyouts as the solution are to PFI are bound to be unsatisfactory. A buyout involves the public authority effectively ending a commercial contract under commercial terms, and as a result penalty clauses must kick in and investors and others will be compensated for the loss of anticipated earnings. They walk off with a lump sum from the public purse.

Solution: nationalise the SPVs as a way to end PFIs

It was recognition of the structural features of PFIs that prompted campaigners to look at the idea of nationalising the SPVs. It is not a buyout because no PFI contract is cancelled or ended: instead ownership of the SPV passes to the government and hence the parties to the main PFI contract are both publicly owned a situation which immediately opens new spaces for restructuring the relationship. 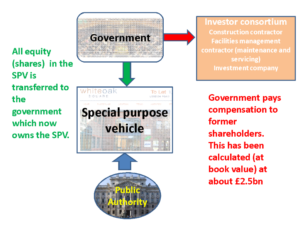 This has two effects which reverse the systemic problems referred to in the first part of this talk. First, control over the terms of borrowing returns to central government which can renegotiate debt with all the lenders. Secondly, the public authorities regain control over all the other contracts, including receiving the profits which had previously accrued to the owners of the SPV. Research with Dexter Whitfield has indicated that, using data up to March 2018, the elimination of SPV profits would reduce the costs to public authorities of their annual payments to the SPV by £1.4bn per year.i 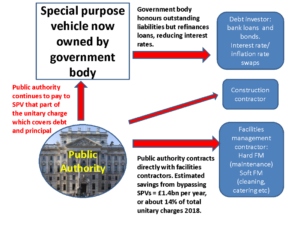 Many plans are being developed for publicly financed and provided infrastructure. However the question remains of how to deal with the toxic legacy we have inherited – from PFIs, PF2s, NPD/Hubs and now MIMs? The question cannot be continually ducked: nationalising SPVs is one option that merits serious consideration.

Read more about this in Nationalising Special Purpose Vehicles to end PFI: a discussion of the
costs and benefits.

The solution is in fact much more detailed than the outline provided in this talk and the full paper considers levels of compensation and the need to honour outstanding debts. It also considers the further changes that need to be made to move towards publicly financed infrastructure and insourced services.