You are here: Home / Articles and Blogs / Twenty Years of the Debt Justice Movement 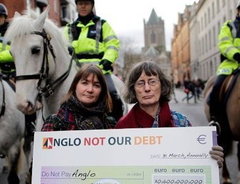 This post first appeared on the blog on the Debt And Development Coalition Ireland and is reproduced here with their permission.

Jean Somers is a long-term debt justice activist and previous co-ordinator of the Debt and Development Coalition Ireland. Here she recalls some of her experiences as a debt campaigner.

This blog is based on my experience working with Ireland’s campaign for debt cancellation for countries in the global south from 1993 – 2005, and my more recent involvement in Debt Justice Action: Anglo not Our Debt.

Debt campaigners have framed debt differently, and they have also differed in terms of the level of change aimed for, or perceived to be possible at particular times.  Some campaigners situate debt within an unfair economic and financial world; without fundamental change, debt crises will recur.  Others focus on the human impact of debt, with desperately needed resources transferred from impoverished countries to rich creditors. Those working from a faith based perspective who see sin as social as well as personal, highlight the immorality of debt payments.  For the Religious Working Group on the IMF and World Bank, social sin arises where there are growing economic disparities, increasing concentrations of economic power, and accelerating environmental abuse.

Within these various perspectives, activists have focused on debt which shouldn’t be paid (illegitimate debt) and debt which can’t be paid (unpayable debt). Creditors, on the other hand, have used the term ‘sustainable debt’, which they define as debt which can be paid without needing debt relief (e.g. longer time to pay), or running up arrears.

The concept of Illegitimate debt challenges conventional ideas of who are the creditors and debtors.  Southern campaigners highlighted historic, ecological and social debt and declared themselves to be the creditors. An historic debt is owed because European colonial powers built their own development on wealth plundered from the south.  Colonisation, therefore, resulted in massive social, economic and ecological debts owed to the peoples of the south. This historic debt dwarfs the amounts claimed by northern creditors’ from southern countries – so that the latter are the true creditors.

In addition to the historic debt, debt arises from the current unfair and exploitative international economic and financial system.  The Southern Peoples’ Ecological Debt Creditors’ Alliance argues that an ecological debt is owed because of the overuse of the resources of the planet by industrialised countries, through their model of production and consumption. This process, which is accelerated by globalisation, has led to environmental degradation, resource depletion, climate change and other negative effects.

Loans made to past repressive regimes, such as in Argentina, the Philippines and South Africa, have been defined as illegitimate or ‘odious’.   Further, where private loans have been converted to public debt in order to bail out lenders – as was done in the case of Irish Banks – this has also been declared illegitimate by campaigners.

Campaigners defining debt as illegitimate  have called on their governments to repudiate this debt.

This is debt which can only be repaid with people’s health, welfare and even their lives. Campaigners highlight the devastating human impact arising from these repayments and from the cuts imposed through austerity programmes.   A widely used format is to compare government spending on debt to the amount spent on health, education or other vital public services.  Debt Justice Action Ireland, for example, pointed out that the €3.1 billion promissory note payment, made by the Irish government in March 2012, could fund Ireland’s primary school system for a year. In the case of southern country debt, campaigners also exposed the contradiction in rich countries giving aid with one hand but taking this back in debt payments.  A campaign run by Oxfam UK back in 1986, pointed to ‘the scandal of the money  Africa gives us’; for every £1 given in famine aid, £2 came back in debt repayments.

Campaigners arguing that debt is unpayable focus on creditors, pressing them to cancel debt.

Framing debt as illegitimate, and highlighting the devastating human impact of debt, do not necessarily contradict each other.  Debt Justice Action Ireland argues that the debt arising from the Anglo Irish bail out is illegitimate while also highlighting the social impact of repaying this debt.   But these different framings raise debates on campaign strategy. Should the main aim be to delegitimise the debt or to focus on its terrible human impact?  Where does the solution to the crisis lie – in debtors repudiating illegitimate debt or in creditors cancelling unpayable debt?  As pointed out by South African debt campaigner, Dot Keet, arguing for debt cancellation to provide resources for human development bypasses the question of how the debts were accumulated and who benefited. To focus solely on unpayable debt could disempower people burdened with debt. They would have to plead for cancellation on the basis of their poverty rather than assert their right to repudiate illegitimate debt.