You are here: Home / News / Victory for the Vultures in Argentina

The long running battle between Argentina and its bond-holders, dubbed by some as the ‘debt trial of the century’ is almost over after Argentina was dealt a blow by a ruling of the US Supreme Court. The Court first ruled that Argentina must pay $1.3 billion to Vulture Funds, and then gave these same funds the right to use the US courts to seek out Argentinian assets around the world. This ruling could force Argentina into a new debt default, with President Fernandez de Kirchner saying: 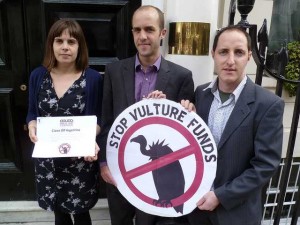 What I cannot do as president is submit the country to such extortion.

Argentina argues that the vulture funds bought up the country’s debt at a deep discount following Argentina’s default a decade ago, and therefore it is unfair to force the country to repay these debts at the expense of healthcare and education. Last month, over 100 MPs across the UK supported Argentina’s fight against the Vultures.

This decision has clearly placed profit above people, and has serious implications for countries in debt distress around the world. Pernicious vulture funds must not be allowed to hold Argentina to ransom. In two weeks Argentina will have to decide whether to pay these debts – should the Government choose to default on their debts in order to focus on improving the lives of Argentinian citizens, they would be well within their rights.”