You are here: Home / Campaigns / Scotland Against Climate Debt 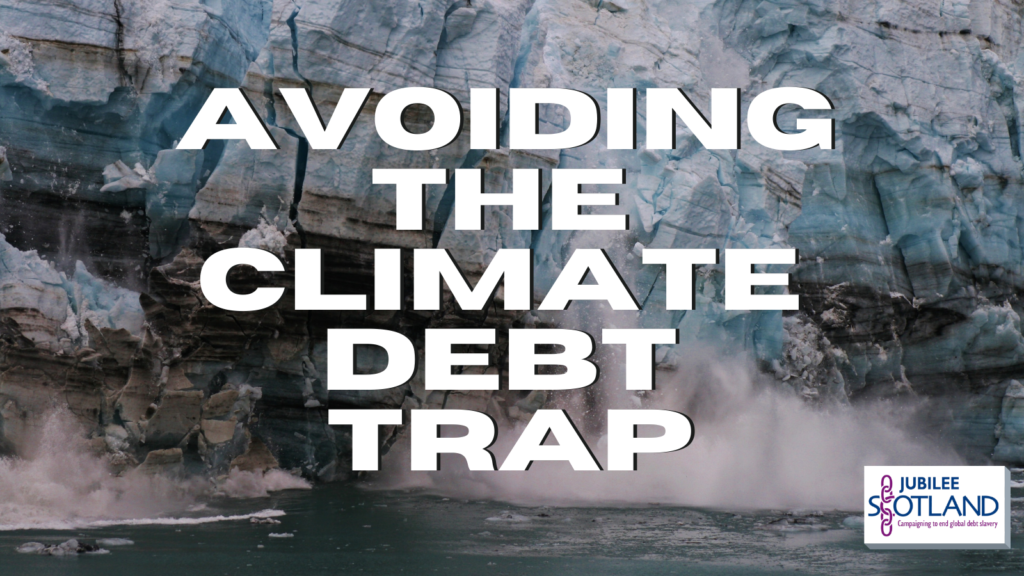 At Jubilee Scotland, we are campaigning to stop countries from incurring further debt due to climate change. High-emission, global north countries,  such as Scotland and the UK, are primarily responsible for the current climate crisis, but countries located in the global south are most vulnerable to shifts in climate.  Droughts, food shortages, habitat loss and natural disasters are some of the loss and damage caused by climate change in the global south.  According to the UN, these climate disasters are now occurring at the rate of one per week, set to cost at least $300 billion per year by 2030, having dire financial consequences on the countries that face them.  This leads to increased debts for frontline communities, as those most in need of loans and investment for adaptation pay higher debt costs on average, stunting their economic capacity to rebuild. Climate based natural disasters often affect already highly indebted countries, with the additional increase in borrowing resulting in a climate debt trap.

Since the early nineties, parties to the the United Nations Framework Convention on Climate Change (UNFCCC) have met to address the ongoing issues caused by global carbon emissions.  At the annual Conference of the Parties (COP), countries attempt to set targets and policies that will be adopted worldwide, like decreasing the emissions they emit and providing more finance to aid global countries adapt to the changing climate.

The next COP, COP26, is set to be held in Glasgow in November 2021. Scotland has previously demonstrated its ambition to tackle climate change, having declared a climate emergency in 2019 and implemented new, ambitious emission reduction targets in the Climate Change (Emission Reduction Targets) (Scotland) Act 2019. COP26 is an opportunity for Scotland to push climate talks in a direction that will make a difference for those paying an unfair price in the global south.

Significantly increase the Climate Justice Fund with new and additional finance, such as from a high-emitter tax

Proactively call for other rich countries, including the UK, to increase their own climate finance informed by a Fair Shares analysis, while championing additionality before and at COP26

Undertake a review of the Climate Justice Fund to build on its success, ensuring that it is fully aligned with best practice in climate adaptation globally

Develop a position on loss and damage and use this to champion progress on it at COP26. Namely, a financial mechanism for the WIM and meaningful development of the Santiago Network