You are here: Home / Campaigns / 10 Years On from the financial crash

10 years after the financial crash, society has been destroyed by crippling austerity but yet very little has changed for the banks. Almost no changes have been brought into financial regulation and we’re at risk of sleepwalking right into another crisis.

In 2008 the banks were bailed out with more than £130bn of public money. Since 2010, the Government has slashed almost £50bn from public services – and over £30bn more from social welfare. By comparison, the Big Four UK banks have paid out over £50bn in bonuses.

The rich get richer and with our money destroy the planet and do dodgy deals. Financiers took our money, crashed the economy and stuck us with the bill.

We need change. We need a new financial system that is democratic and transparent, works for people and the planet and is stable.

It is, for this reason, we at Jubilee Scotland decided to take a stand and took to the streets on Saturday 15th September for two separate demonstrations to mark 10 years since the financial crash. Our demonstration was part of the ‘C 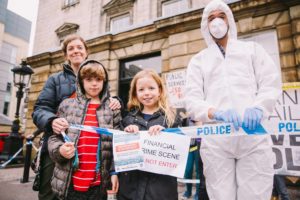 hange Finance’ campaign. This campaign is using the anniversary to highlight the impact the crash had on regular people and to push for tighter regulation of the finance sector to prevent another crisis.  With help from Friends of the Earth Scotland and other activists we turned RBS banks in Edinburgh into financial crime scenes. Police tape was used to mark off the areas outside the banks and some of us dressed in hazmat suits.  We held banners, handed out flyers and chanted, urging the public to take notice. We chose RBS because as a largely publicly owned bank, it is a prime example of how ripped off the public were. Ric Lander of Friends of the Earth Scotland had this to say;

“RBS is a broken institution. The company nearly brought down the whole UK economy, has been found guilty of criminal practices, and has been one of the world’s biggest investors in companies driving climate change.

“10 years since the people were asked to pay to bail out RBS we’re at a crucial juncture. The bank remains 62% owned by the public giving us a real opportunity to turn its branches into network of local banks that actually work for people rather than a corporate giant being solely focused on short term profits. The forthcoming Scottish National Investment Bank could provide the finance we need to build a low-carbon economy in Scotland.

“If our leaders show a little courage and commitment then sustainable, democratic banking could still be the true legacy of the financial crisis.”

These banks need to be held accountable for their actions. Banks got bailed out. We got sold out. 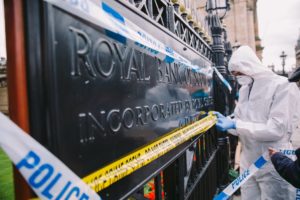 Along with the Edinburgh World Justice Festival, we held a ‘Reimagining the Economy’ conference. You can view a quick post about the conference here.

We were just one of many organisations across the world taking this action. We joined the Change Finance coalition and this is their statement:

The financial crash was an unforgettable symbol of a broken globalized and interconnected financial system. The collapse was the culmination of a financial crisis that resulted in millions of people losing their jobs or savings. The systemic, greed and recklessness, and the irresponsibility to society shown by financial corporations were put on display – and so was the passivity or complicity of politicians in the years before the crisis. The big financial Corporations were allowed to run markets – and the price was staggering.

Since then, many were led to believe that lessons were learned and that perhaps some sorely needed change would be coming. Instead, despite the fundamental critique of the ideology of free financial markets many voiced after the financial crisis, the malevolent grip of neoliberalism continues to govern all financial policies, rules and institutions and thus citizens’ lives. In the European Union and in the US, lobbyists Continue to use their unbridled power, leaving financial markets equally dangerous today, if not more. New regulations are timid and Superficial, and a deregulatory backlash is currently underway.

The risk of another collapse keeps growing, and we could yet again be forced to bail out megabanks with billions of public money. Millions of new victims could join the ranks of those who already lost their jobs, their houses and their future. Still today, millions find themselves impoverished and indebted, reminding us that the Crisis is still with us. And while large sums are pumped mindlessly into big banks, less and less money is made available for investments in jobs, public services and sustainable development.

We need to break up big banks, do away with useless speculation, introduce effective and just taxation of the financial sector, and undertake public investments in services and infrastructure that will improve life for the many and create jobs.

We want to stand up against the big negative impact of finance, fueling Social inequality, poverty, shortage of public services, and climate change and embrace a new way of producing and of sharing resources and wealth. The democratic Control we urgently need starts by joining forces with different people and groups. Finance has displayed its power, but if we come together, we can push for necessary political action. We need citizens’ groups to step into our coalition and make 2018 a turning point – so that the next 10 years will finally be the time where we take back control over finance. 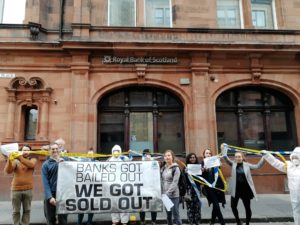