You are here: Home / News / Reimagining the Economy Conference

This article was written by Leo Brown, who was our new Campaign & Events Assistant. 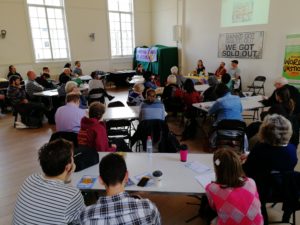 I had the opportunity to attend the Reimagining the Econom y conference we were hosting as part of the Edinburgh World Justice Festival at the Edinburgh Methodist Church. The one day conference brought together academics, campaigners and politicians to open the discussion 10 years on since the financial crash. It was definitely a highly thought provoking day and raised a lot of interesting questions.

Up first there was an opening plenary with Bodo Ellmers, Derek Wall and Grace Blakeley. Bodo spoke about what has happened over the past 10 years, how the old crisis has not yet been solved and we already see signs of a new crisis. He claims the 2 situations are interlinked. One of the factors that has caused the crisis is rising inequality in most part of the developed world throughout the 80s and 90s especially in the US. The crisis started as an American crisis, then became a North Atlantic Crisis and finally becoming a global financial crisis. There was also stagnating, falling wages and credit replaced wages. There was a massive debt snowball.  Next up was Derek Wall, author of the book ‘Elinor Ostrom’s Rules for Radicals’ He focused a lot on how we can transform the economic system, and how we should look to Elinor Ostrom for inspiration. He spoke about how anyone has the power to change the world, for example the effects James Conolley had upon the British Empire. Finally Grace Blakeley talked to us about financilisation. She told us the story of the Panic of 1866, which was the last time before Northern Rock that any British Bank was ever bailed out. Overend Gurney and Company had exposed itself to the industrial revolution, the railway in which a massive bubble had built up. When the bubble burst they found them selves exposed. 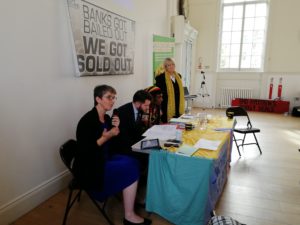 We also had three politicians taking part in our own version of Global Financial Question time. This gave each of them an opportunity to talk about the past 10 years and what they would do to fix the global financial system over the next 10 years.

Taking in the theme of Scottish struggles Living Rent, Scotland’s Tenants Union,  gave a talk on the housing crisis.  Gordon Maloney and Eilidh McIvor talked about fighting for tennants rights and some of the positive changes they have made. For example, they started a ‘Drop the Clause’ campaign calling on letting agent DRM residential to stop charging tennants a £60 fee if there’s any claims on their deposit at the end of their tenancy. This campaign was successful and now tenants aren’t charged these unfair fees. They believe in helping people who have been ripped off or scammed by landlords. 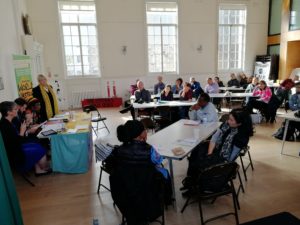 Student for Cooperation’s Mike Shaw gave us a workshop on Coops and Cooperatives. He gave us a rough overview of what a co-op does and how these can be used as a fairer model of ownership. A Co-op is a voluntary organisation, it’s about people coming together, collectively and demographically, to provide a service. There are one billion coops collectively run in the UK. He talked to us about Edinburgh University Student housing cooperative, his own experiences and how it operates.  He then asked us to think about what we would choose to make cooperative, how we would implement our idea and any challenges we might face. He also spoke of the future plan to make a ‘Co-operative College’ in Edinburgh in the style of the Ragged University. Co-ops break down the tenant landlord relationship. They are a way to empower people and help change their lives. 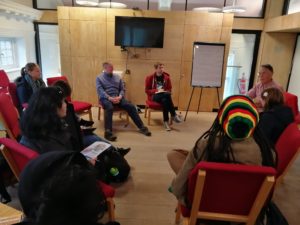